Preferred English translation of the name of your organization:
The German Coordinating Council of Christian-Jewish Cooperation

Year of establishment or foundation of the organization:
1949

Brief history of the organization:
After WW II, the founding of the first Associations of Christian-Jewish Cooperation in Germany was initiated by already existing National Councils of Christian-Jewish Cooperation in the United States, the UK, France and Switzerland. As part of the re-education program for the still young German democracy, the U.S. financially supported the founding and development of the first Associations.

Associations in Munich, Wiesbaden, Frankfurt M., Stuttgart and Berlin were the first to be founded in 1948/49. These established on November 10th 1949 the Deutscher Koordinierungsrat in Bad Nauheim. Currently there exist 85 local Associations throughout Germany. After the reunification of Germany in 1989 Associations were founded in the Eastern part of Germany as well.

Number of members (approx.):
85 local associations with around 20.000 members in Germany

Where is your organization based?
Our office is based in Bad Nauheim (near Frankfurt a.M.) 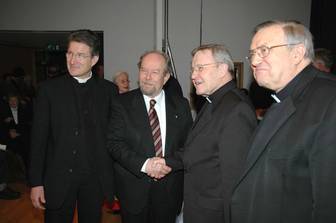 Main focuses/areas of your work:
Our mission statement, preamble, states:
•    Founded in the biblical tradition we are convinced that neither the government nor the established religions have a right to curtail a person’s right to live in freedom regardless of faith, race, or gender
Thus we focus on:
•    promoting understanding and cooperation between Christians and Jews based on mutual respect for each other's religious identity and tradition
•    reminding the Churches of their long Anti-Jewish theology, and their need to overcome the theology of supercessionism
•    addressing issues of human rights and human dignity based on the traditions of Judaism and Christianity
•    supporting and facilitating Jewish Life in Germany and preserving all traces of Jewish Life in Germany before the Holocaust
•    recognizing the State of Israel as the Jewish homestead
•    opposing all forms of antisemitism and antizionism, discrimination based on gender, race or religion
•    coordinating national activities through conferences, lectures and workshops held regularly in different cities of Germany
•    encouraging  research and education on Christian-Jewish topics for students, teachers, religious representatives
•    facilitating theological discussions

How often does your organization meet?
-    January: Special Board Meeting to determine the recipient of the Buber-Rosenzweig Medal and the annual theme
-    March: National Brotherhood Week
-    June: Annual General Meeting
-    September: Conference of the General Secretaries of all 85 member organizations at which the board is present
-    November: Rabbi Brandt lecture
-    Ca. 6 board meetings a year
-    Ca. 6 meetings of the three Presidents

Events regularly sponsored by your organization:
The annually “Woche der Brüderlichkeit” (National Week of Brotherhood) which begins with a grand opening ceremony which is hosted each year by a city in which one of the 85 member associations is located. This event offers the opportunity for politicians and Church Leaders to connect with the people as well as to engage in the interreligious dialogue between Christians and Jews and Muslims. During this popular event the “Buber-Rosenzweig  Medal ” is awarded to a person or institution especially active in fostering the dialogue between Christians and Jews. The National Brotherhood opens with a grand ceremony that is televised nationwide, and makes the national evening news. It begins on Friday evening usually with an art exhibit by students who have worked on the theme that we have chosen for the National Brotherhood Week and ends with Kabalat Shabbat in the local Jewish Community. On Saturday there is a lecture by the recipient of the Buber-Rosenzweig Medal, and several other events. The local organization of the respective city offers a yearly program of lectures, exhibits, musical events, and many other features.

Besides the National Brotherhood Week the DKR hosts three national and international Conferences annually. We issue statements concerning political, religious and cultural issues that concern our mission. We are invited to and present at each of the main Political Party Congress’ as well as at the Protestant and Catholic Kirchentag (church congresses) each year. The respective Bundespräsident (Federal President) is our Patron, which gives us a strong political standing in Berlin. In the Fall we also organize a yearly Rabbi-Brandt-Lecture in a different city focusing on political issues from a Christian-Jewish viewpoint.  The DKR has a yearly publication called “Themenheft”.

Does your organization have any regular publications (in print or online)?
The annual “Themenheft” is a platform for offering a Christian- Jewish perspective on current events and answers to difficult questions on controversial topics. While trying to stir a conversation in society we also try to offer information through an informative, sometimes controversial and yet entertaining magazine.

Another publication is the annually published “WdB (Week of brotherhood) Documentation” including speeches, sermons, newspaper articles and photos of events that took place during the weekend of National Brotherhood Week.

Has your organization figured in any published material such as newspapers, books or blogs?
We have been featured in many publications, all, alas, in German, but the yearly documentation of the National Brotherhood Week has a large sampling of media reports. 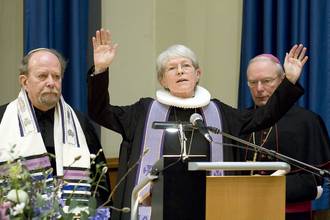 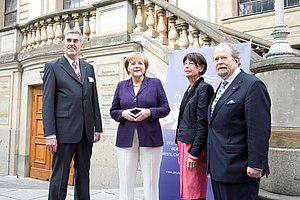 Briefly describe your organization’s relationship to the ICCJ:
The DKR has a special relationship to the ICCJ through its liaison officer. This position, due to the fact that the ICCJ’s main office is located in Heppenheim makes for a close relationship.  The GS of the DKR and the ICCJ are in regular contact. Members of the ICCJ board have published in our “Themenheft”; the former and current GS of the ICCJ are always invited of our Conferences and speak at these conferences. Through the ICCJ the DKR has the chance to broaden its view on Christian-Jewish Dialogue and profits from our close contact to our internation roof organization.

What is the greatest challenge your organization faces at the moment?
Our challenges are:
•    Combatting antisemitism, racism and xenophobia
•    How to bring more young people, Jews and Christians, to join our organizations or become engaged in our mission?
•    The new situation of many immigrants from predominantly Muslim countries with a strong tradition of Antisemitism
•    How can we ensure that the work of Christina-Jewish Dialogue reaches a society that is increasingly secular and often suspicious of religion?
These are but a few, new ones arise daily. 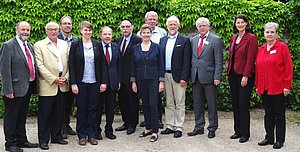 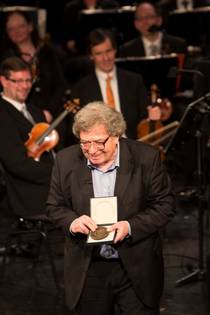 Philosopher and writer Navid Kermani
(right) after receiving the Buber-
Rosenzweig-Medal (BRM) in 2011.
Kermani was the first and only Muslim
award winner of the BRM.
To the left of him: Former Jewish president Rabbi Henry G. Brandt.

End of an era:
In 2016 the Catholic president of the
DKR, Dr. Eva Schulz-Jander, took leave
as member of the Executive Board
after 21 years, and Rabbi Henry G. Brandt after 31 years.